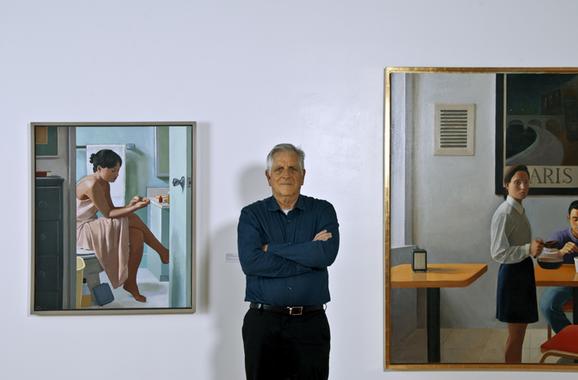 Painter Dan McCleary, who in 2010 founded Art Division, which serves young adult art students in the Rampart District of Los Angeles, has a deep feeling for human dignity. For more than 30 years McCleary has been painting models chosen from his friends and acquaintances, portraying them with equal doses of solemnity and candor. A carefully chosen selection of his works, now on view at the USC Fisher Museum of Art, gives some indication of McCleary’s accomplishments. Christopher Knight of the Los Angeles Times says that McCleary “is among the finest figurative painters working today.” 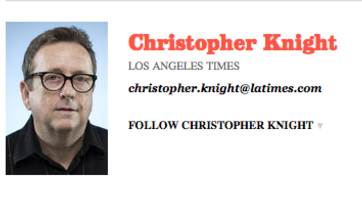 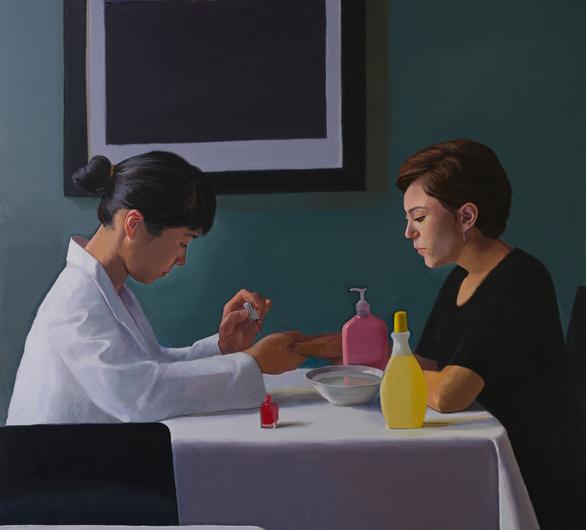 Dan McCleary is among the finest figurative painters working today. Sixteen paintings made during the past 20 years in the survey “Dan McCleary: Every Day Sacred” are clear evidence, if any were still needed, that a full-scale retrospective exhibition is in order.

At the USC Fisher Museum of Art, curator Ariadni Liokatis opens and closes the modest but weighty show with small and exquisite portraits. Bust-length depictions of “Francesca Silvestri” (1993) and “Dr. Martinez” (2013) are characterized by the same soft, radiant stillness that also infuses McCleary’s half- and full-length figures.

The style is part Piero della Francesca, whose crystalline Renaissance paintings stripped away visual disorder to impose simplified geometries with a timeless aura. And it is part Alex Katz, modern master of billboard-style austerity

In between, McCleary renders simple genre scenes — ordinary people engaged in common activities. A couple dances. A waitress looks up after refreshing a customer’s cup of coffee. A man, glimpsed through an open bedroom door, weighs himself on a bathroom scale. Another man has his hair washed at a salon.

The painterly language these works speak goes back to artists like Vermeer, Chardin and even Fragonard, as well as to such Modern artists as Edward Hopper and David Hockney. McCleary’s subjects might be shown peering into the screen of a smartphone or scrutinizing a cafeteria menu. But the traditional theme is a reflection on the nature of looking at paintings.

Instead of figures posed on a theatrical stage, we get the inside of a 7-Eleven or a neighborhood beauty shop. Rather than a bourgeois interior where light streams in from a side window to illuminate a woman reading a letter, an ordinary restroom is the private place for a fellow to hold up an inscrutable note for perusal.

I have been teaching in art schools for 35 years, and before that studied in art schools for 10 years. Unfortunately, Dan’s work does come across as being very stilted. The shadows appear to have an amateur tendency toward muddiness.The spaces and atmosphere gives the appearance of an…

Since we are looking at people looking, the paintings become social and cultural mirrors. Disconcerting, they gently stir the pot. Slowly our perceptions settle down, approaching the stillness and clarity embodied in the paintings.

McCleary also injects a good deal of wit into his work. The two women engaged in “The Manicure” come straight from the drawing room of 17th century Dutch art, transposed to a strip-mall nail shop in latter-day L.A. They are seated on opposite sides of a table, a bowl for soaking cuticles and assorted bottles set out between them as a mundane still life.

The intently focused woman on the left, her head partly framed by a picture on the wall behind her, carefully applies bright red polish to the nail of the watchful customer on the right. It’s nothing less than a vernacular record of a painter and her public, engaged in a perceptual transaction. The fact that one holds the hand of the other gently infuses a visual scene with the intimacy of touch.

McCleary’s paintings require close scrutiny, offering commensurate visual rewards. The simply dressed fellow in a white shirt and black pants reading a note in the bathroom, for example, is titled “The Performer.” (Perhaps he’s an actor prepping to go on stage.) The picture is infused with a clear, even, beautifully observed light, which is picked up in a meticulous geometry along the lip of the sink, the edge of dispensers for paper towels and liquid soap, a nearby trash can and the window sill.